This picture was taken around 30 weeks. We’re coming up on 31 already. Benjamin seems to grow everyday… our neighbor about a month ago thought I was having twins. So, I don’t think he’s having too many issues with his growth at this point.  : )

I am “feeling” 45 though. My body feels like I’m closer to 36+ weeks along rather than 30. Everything hurts. To get up from the chair feels like when you get out of the pool after a few hours… so heavy, but stiff and painful. My bones hurt way more, especially my lower back as the sacroiliac joint pain has flared up again and seems quite exasperated this time! If my weight isn’t distributed on both feet perfectly, I have pain back there. I’ve been quite breathless for some time already. The first time I started feeling it, I worried about my heart. Now I know why the Lord cuts off child bearing age around now… I shouldn’t be wondering if I’m having a heart problem when it’s a pregnancy symptom.  : )

But, I am blessed that we have another son on the way. I have one full month left (June), to prepare for him. I’ve picked up my knitting again to finish his blanket. I have less than a skein left. I pulled out Matthew’s little baby clothes and washed them all. We’ve set up the bassinet, have a pack of diapers on the way from Amazon and now I’m trying to figure out how to have my husband at the hospital with me or how they will even visit. We still aren’t connected to people out here so it’s a very hard dilemma as I like to have everything prepared.

My first c-section the spinal didn’t take so I felt everything. It was horrible. Since then with the other c-sections, I’ve had to fight a room full of people that I need a general (being put out) as I just cannot take the thought of chancing going through such a thing again. It’s a very hard thing to do when I feel so vulnerable at the time with strangers all around me. So, I’m hoping somehow Matthew can be there to “fight” for me. He was witness to what happened in 2006 so it would be so nice to have him there for me!  : )

I have my second non-stress test on Thursday and at 32 weeks on it will be twice a week. It’s a one hour drive one way to the hospital for the appointment. The hospital is very small, the smallest hospital I’ve ever been in. Anyways, they will do weekly ultrasounds then too. So, I do believe they are trying to keep tabs on everything. I’m curious as to how my placenta looks as I don’t think it’s been looked at since the discovery of the calcium on it. I’ll update as we go along. We’re just praying for a healthy baby. I know in one way or another all will work out as it always does and hopefully Benjamin will be home with us in 6 or 7 weeks or so.   : )  He has the hiccups right now. Silly boy!

Just a sweet picture of you two again!

Our new kitty! Our last kitty we lost a couple of month ago because a stray dog came around. Instead of shoeing him off right away as we should have, we were nice to him but at the expense of the cat we so loved. Though the dog is gone, we’ve never seen our cats since. We got this one local. He’s a big lover who wants his tummy rubbed all the day long. 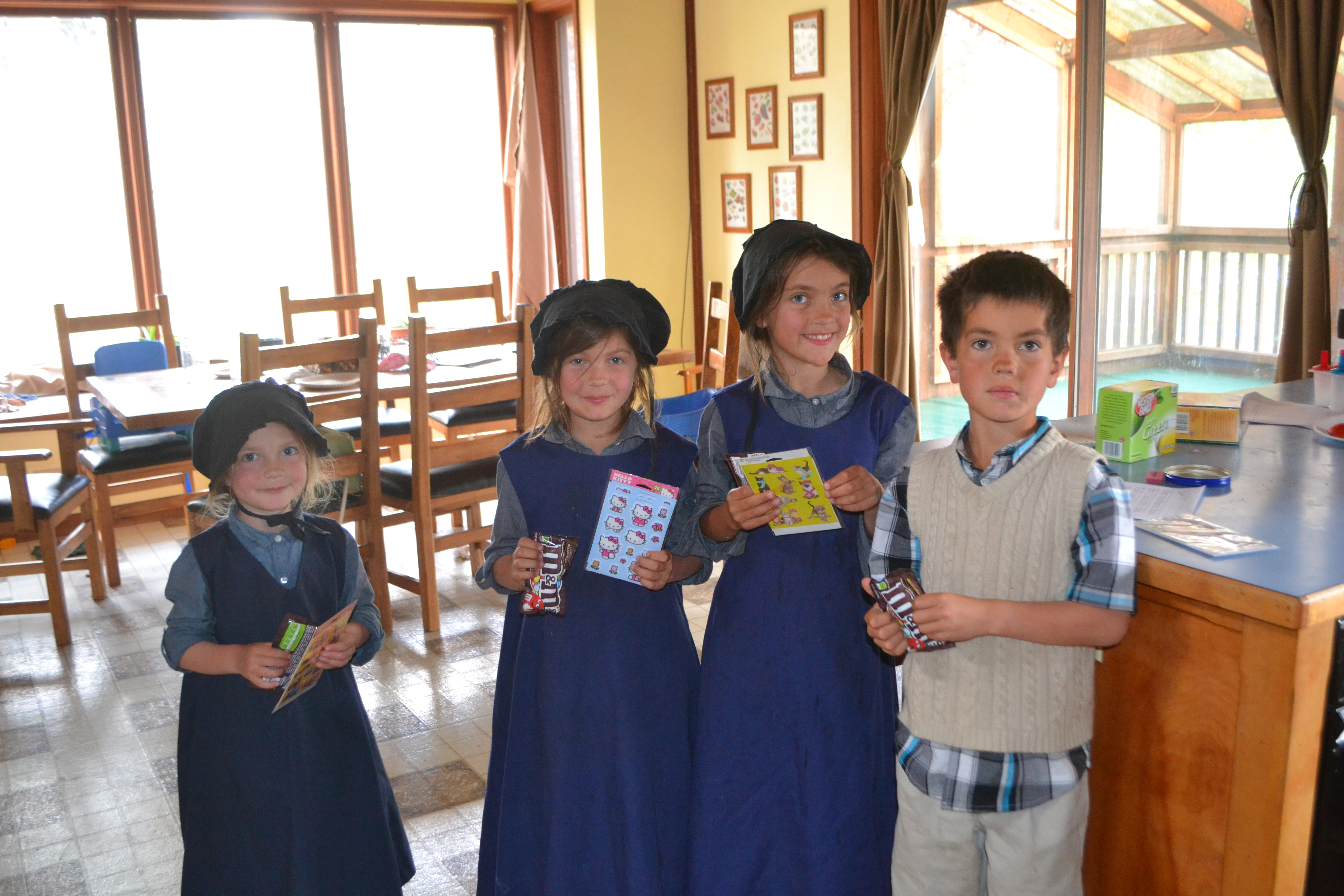 Something special. Grandma Pam sent the kids some stickers and their own candy bar. They have never had their own candy bar before… we usually buy donuts or something cheap and easy to share so this was a real treat. More special I think was them just receiving something in the mail. I think they’ll really be “spoiled” when grandma comes to visit after baby Benjamin is born.  : )

Just a little excited from the gifts from grandma. 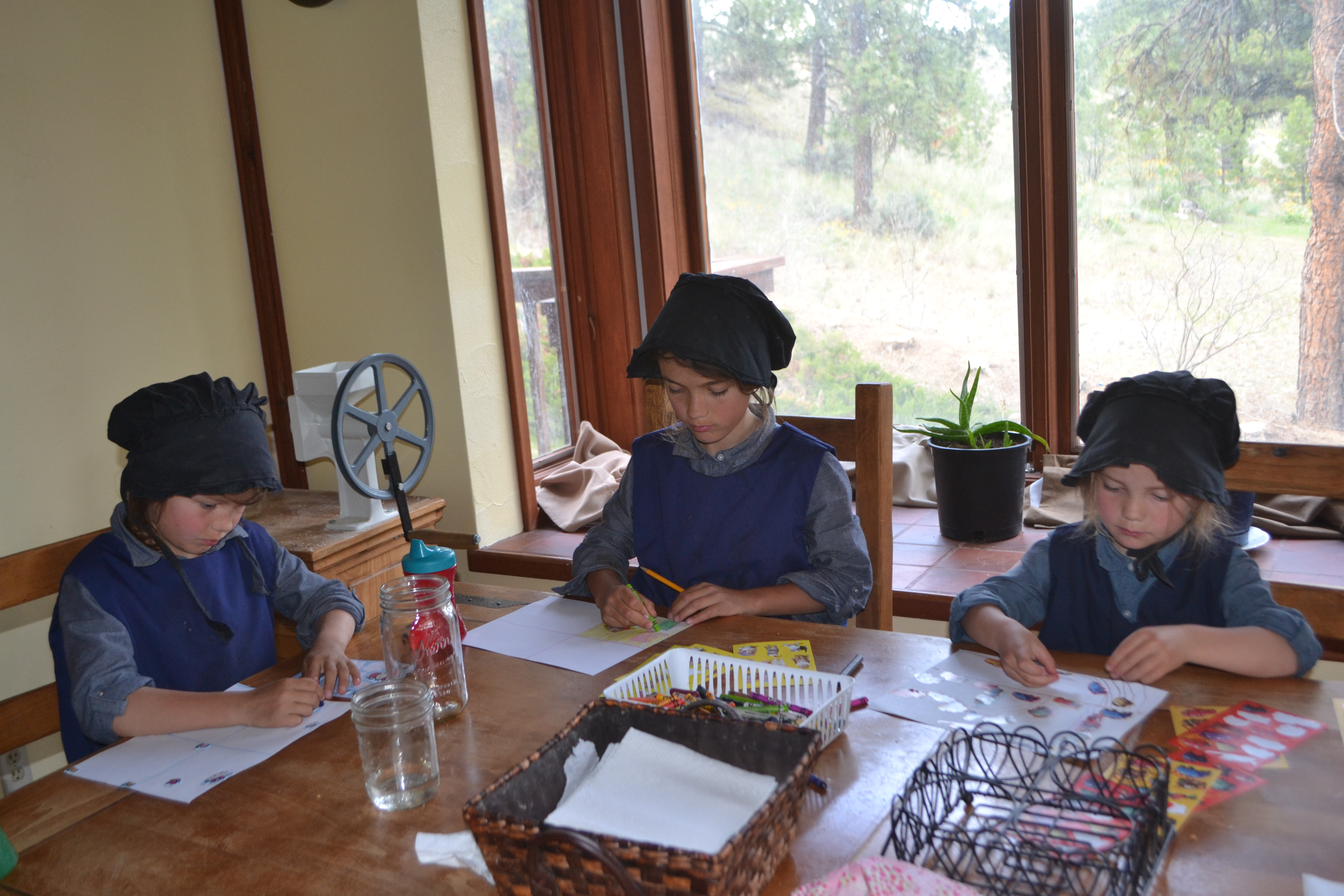 Off to play with their new stickers. 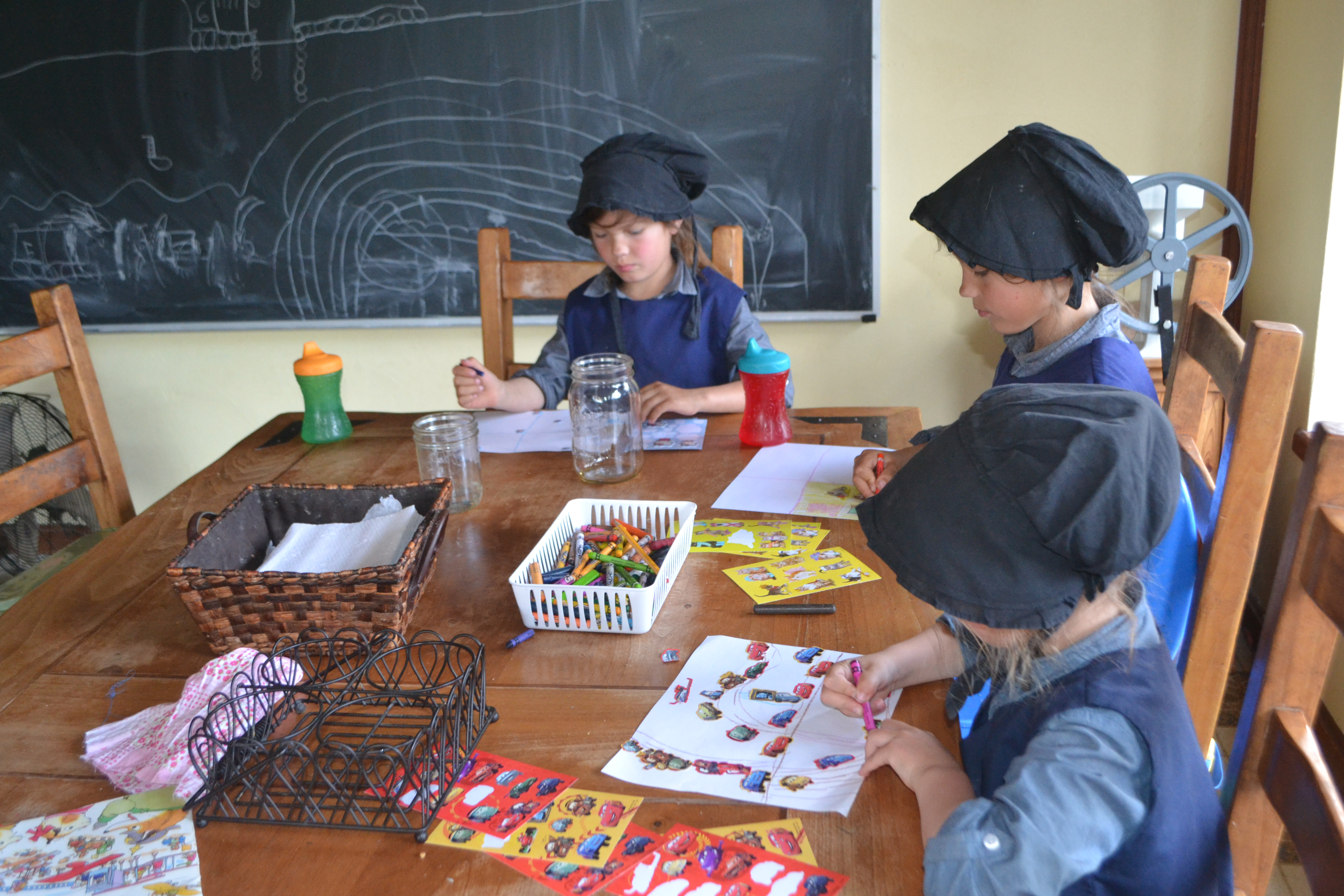 Leah actually picked the boy stickers – the cars. : ) She’s making roads to put them on. 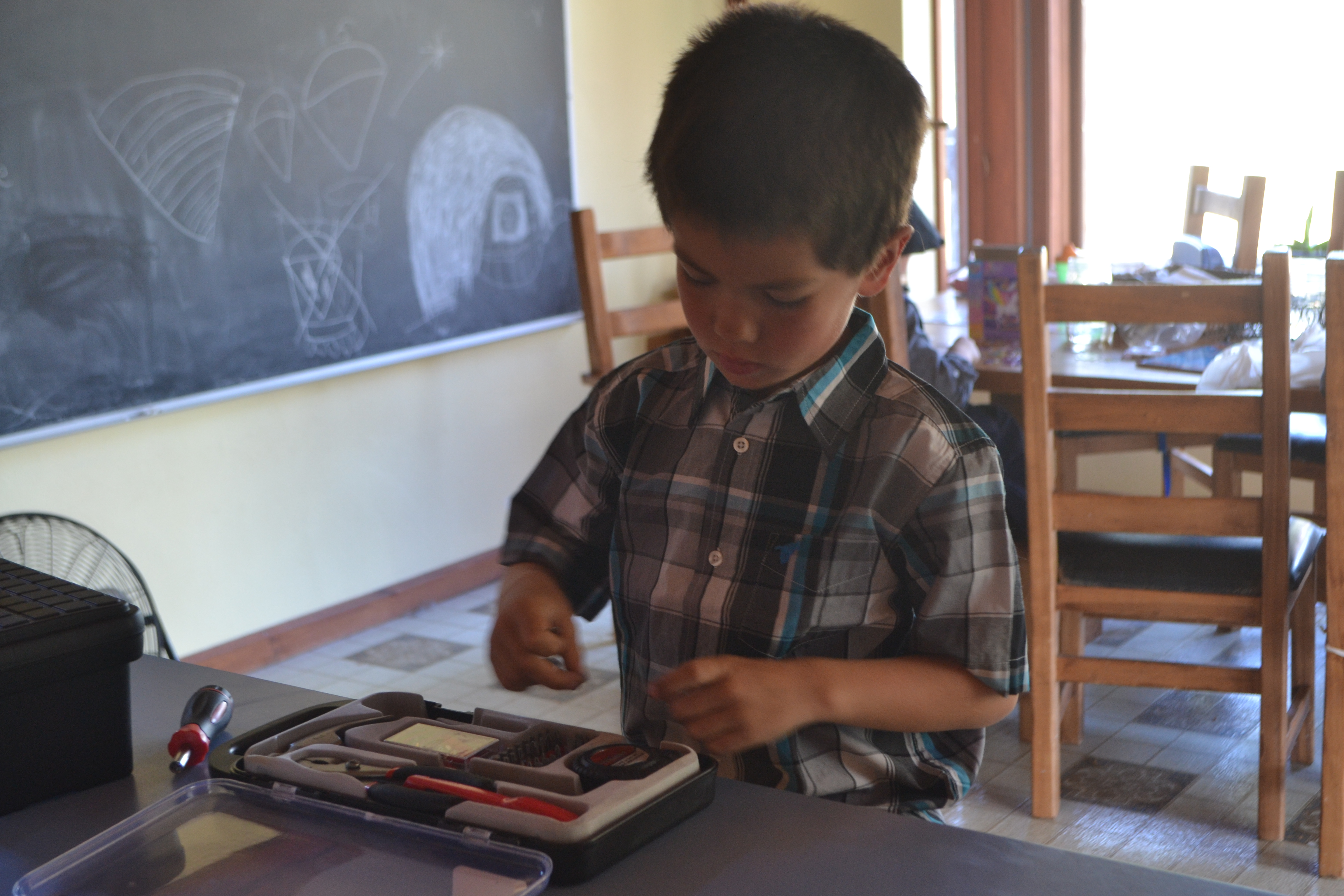 I read a book recently that shared not to buy them toys so much but real things to play and learn from (tools, microscopes, musical instruments, etc…). I liked the idea and bought Matthew a tool kit from Walmart. He loves it and uses it all the time now. He puts boards and sticks together in the yard. He makes crosses from branches and brings them in to us. He helped daddy make something for his bees the other day the required a frame.

Last Friday was a beautiful day. It seemed like it was really the first good day of spring or early summer. I couldn’t see us home schooling that day. First we went for a walk then daddy wanted to go back out and take pictures while I was home resting. The girls wanted to go with dad of course. 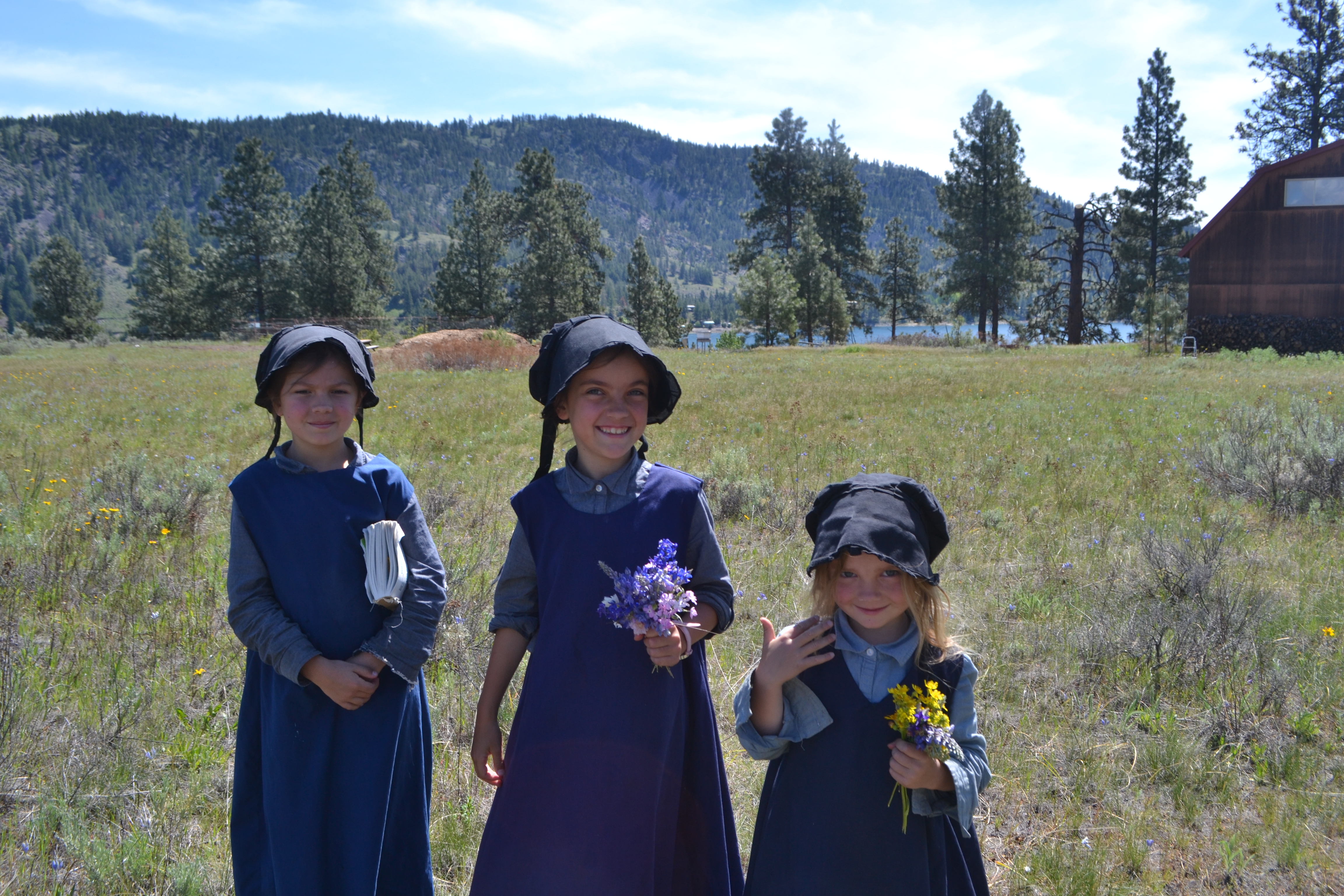 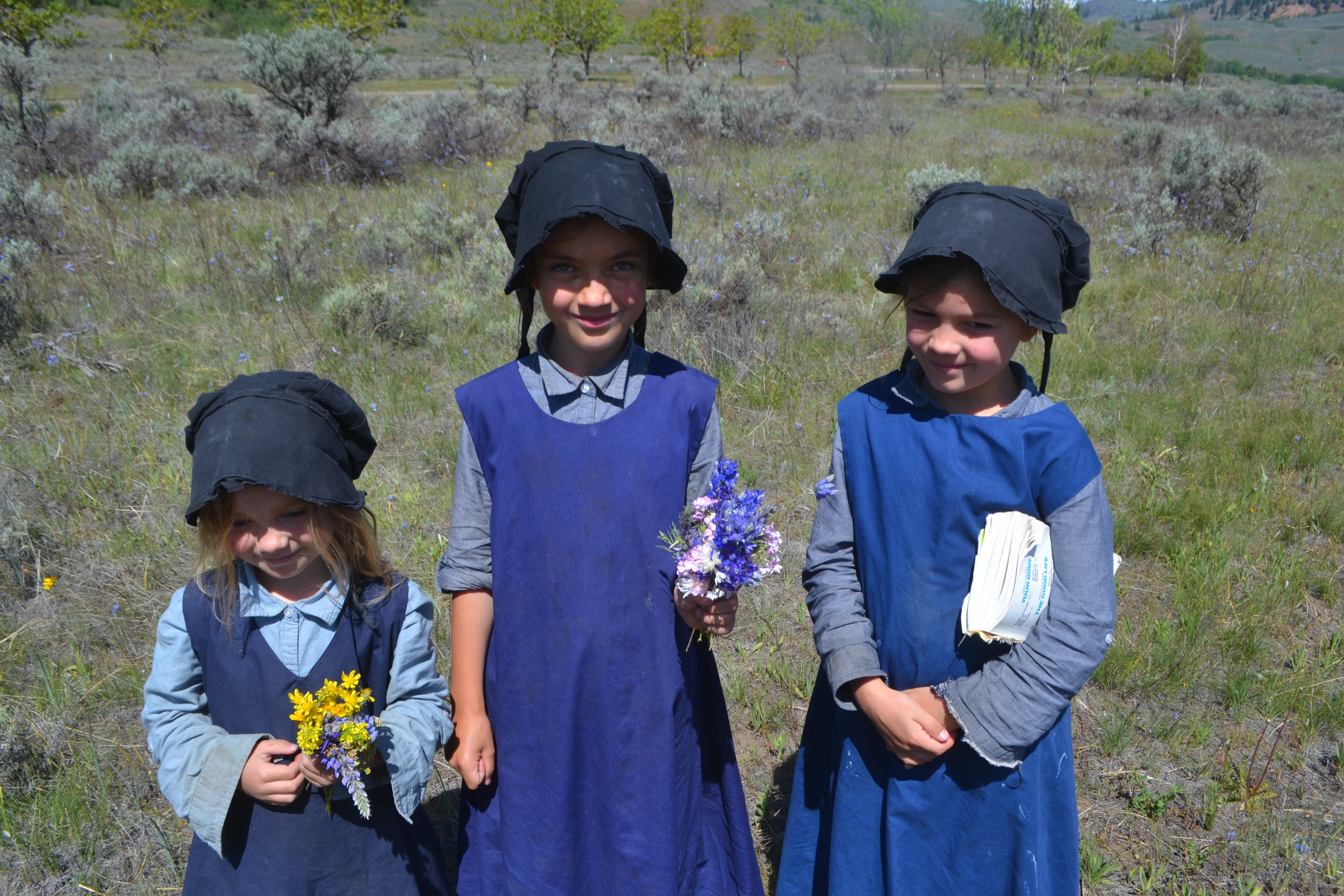 Our other view up by the barn. By far my favorite view. I love the country.

Yes, that’s our garbage can in the background. It works best for a big family. They pick up every other week and it’s always full.  But, we’ll try to focus on Elisabeth’s pretty flowers.  : ) 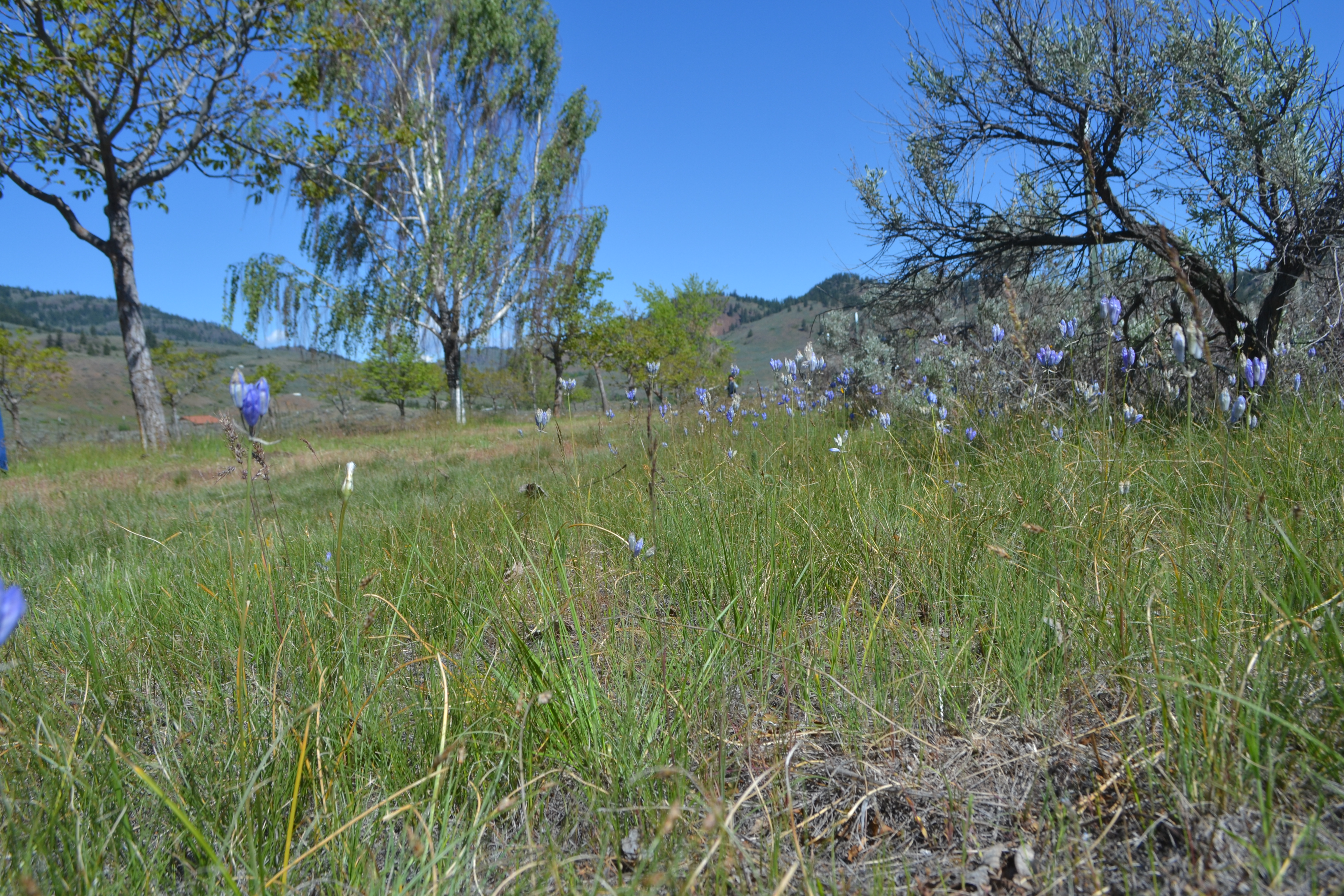 One of our tropical looking flowers on our property. Yes, we are in Washington and yet we have cactus and snakes and flowers that look like they are from the tropics.

Daddy forgot to use the close up feature of the camera. He’s going to try to get this again sometime. 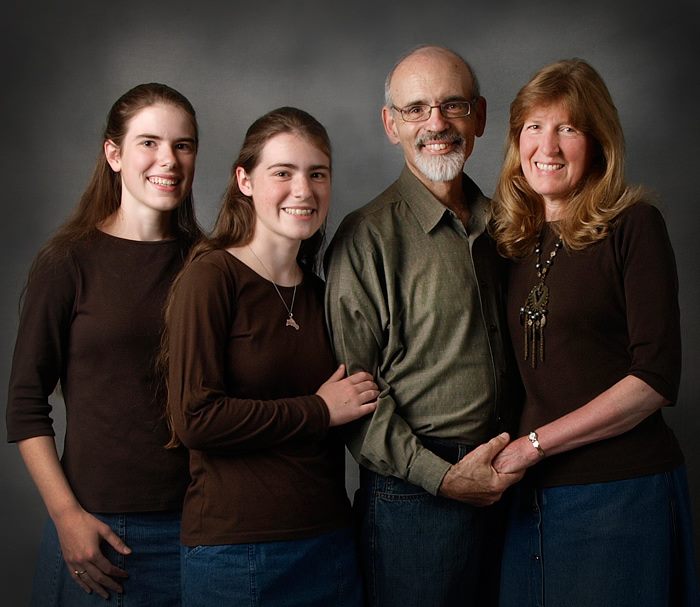 Our friends Bob and Brenda whom we haven’t seen in over 2 years contacted us about a year ago about this family that they are friends with… Dan and Rebecca Small. He had a condition in that he had 3 months to live. I felt led to call Rebecca last year and was so glad that I did as she was so receiving of a stranger calling her who cared. She warmed up to me quickly and we talked for a long time. We spoke a few other times and disclosed other trials and such and found that we both had a lot in common  Matthew contacted Dan as well and they spoke on the phone and e-mailed on occasion. Dan had a website also for some Bible stories for kids that he had made so our kids read them with dad at night for a time. Last they spoke, Matthew and Dan were going to critique each other’s websites.

Six months ago or so Dan e-mailed everyone to let them know that he felt the Lord had healed him. He was a little hesitant to but was so filled with joy that he couldn’t hold back. He was feeling much better. We didn’t hear much about his condition as he was feeling better. He and his wife went down South somewhere to where their daughter was in a National Scripture memorizing type contest. They also drove a day’s drive to Yakima, WA from Brinnon, WA as he was to preach on Easter Sunday at a church there.

We just received news this morning from our friend that he passed. The above picture was taken a couple years ago just before his illness. Please pray for his dear wife and children as I know they are all hurting and missing him so much. She wrote to share that he had a peaceful day but suffered through the night with breathing. His last words to her was, “Peace. Peace I leave with you.” What beautiful words to leave with her. He wants her to be in peace about his death. He loved the Lord and was more than happy to go though he wanted to be here for his family.

Update:  Apparently the doctor did look at the placenta and he wants me to start on baby aspirin to keep the blood flow good for baby. I am going to start non-stress tests in 2 weeks locally so I won’t have to drive 1 hour one way (30 minutes one way). I still don’t know if he measured the baby but all seems well…  : )

I went to my appointment yesterday morning with the 1 hour glucose test on my mind, the wanting to get checked for anemia once more as I’m out of breath earlier than normal and what I needed to do afterwards in town. I took my glucose drink upon arrival and the doctor’s assistant called me back. Getting a little closer to the hour to have my blood drawn and I still hadn’t seen the doctor, he came in. Immediately and happily he shared about a phone call and something about a 74 year old patient of his who he discovered doesn’t have ovarian cancer but something due to her liver that another medical facility failed to disclose to him. He put me on the table to do the ultrasound and then his phone rang…. He was gone and I was looking at the clock as I had 15 minutes or so to get my blood drawn. I did not want to drink the glucose again so I was determined to wipe the gel off my belly and tell the front desk if he didn’t come back in so many minutes.

The doctor came back and I shared about the glucose test and the timing of the clock.He said ten minutes late wouldn’t make a difference. I spoke about being out of breath and he shared,”Well, you haven’t been pregnant at 45 years of age either.” I thought that was cute. He looked at Benjamin for 1-2 minutes sharing that his stomach looked normal and how with down syndrome they have a variation with their stomach and had me out the door. I didn’t realize until I got home later in the rush of things that I had completely forgotten that he was supposed to look at the growth of baby Benjamin and the calcium on the placenta. How I could forget something like that when I have thought of it several times a day for the past 3 weeks is beyond me. Maybe the rush of everything once again or the complete absentmindedness/forgetfulness that we get in later pregnancy. Oh, it kept me up last night. I lost 3 hours of sleep. I felt so bad and a bit upset that I was whisked in and out so quickly again. Poor husband woke to me crying last night and comforted me as he always does (pregnancy brings out the tears a bit more too).

So, I called and left a message this morning with the doctor’s assistant explaining the situation. I will try to get in next week. I’m still awaiting her call so I’ll call her before the day is done. I know the doctor completely forgot too as he seemed elated at the discovery at his patient (that he probably wasn’t supposed to disclose to me) and he set up my next appointment for 4 weeks out. This one had been for 3 to check for growth. I’m sure he’s going to feel pretty bad and stupid on his part. I know these things happen. He has a lot of patients. I’ll just have to keep a list of anything I wish to discuss with him and tell him that I need more time as this isn’t the first 5 minute visit.

There’s my absentminded thinking that strikes me in pregnancy. I know many other women go through the same things… I don’t know what it is but it’s embarrassing. Especially when it’s something important that you think of day in day out.  Poor Benjamin, you don’t know a thing in your nice, comfy place and that’s good. I’m sure your growth is just fine as I look 33 weeks along, not 28!  : )  See you soon sweet boy!